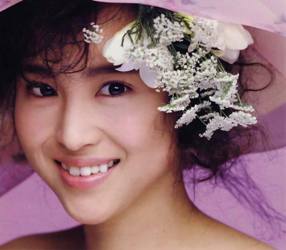 Seiko Matsuda (born Noriko Kamachi on March 10, 1962) is—in a nutshell—the definition of a J-Pop Teen Idol of the 1980s. Dubbed as the "Eternal Idol" because of her long career.

Needless to say, she is the most well-known artist of her day and even now. She was consecutively receiving no. 1 hits with the songs she sang. Twenty-four consecutive no. 1 hits, to be specific. With that in her arsenal, it's no surprise that she'd became famous not only in Japan anymore. Ask any of the adults who grew up in the 80s about Japanese Pop music and they'll most likely bring her name up, whether they were fans of her or not.

Her first ex-husband, Masaki Kanda, is an actor in his own right, while the late actress and singer Sayaka Kanda was her only child.