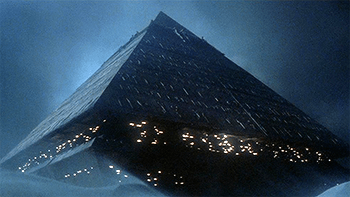 Fly like an Egyptian!
Riker: I've seen these things all over the ship. They all look the same: primitive, and... non-functional.
Picard: Ceremonial; and deceptively primitive.
— Star Trek: The Next Generation, "Masks"
Advertisement:

To quote the main article, Bamboo Technology covers "the use of mechanisms with a level of technology closer to the Stone Age to achieve feats usually achieved with Industrial or even Modern Age technology."

Sufficiently Advanced Bamboo Technology, on the other hand, covers mechanisms with a Stone Age (or other ancient period, like Bronze Age, Iron Age, Medieval Period, etc...) appearance but a High Tech function that is beyond the achievements of Industrial or Modern Age technology: primitive-looking but highly advanced technology. Like the Stone Age equivalent of Crystal Spires and Togas, this is very often used to illustrate how advanced a culture's technology is by making it blend in almost seamlessly with their environment and/or architecture.

Ancient Astronauts and Precursors have the interesting habit of building their technology to look like primitive artifacts. This is distinguished from classic Bamboo Technology in function but not in form. In this case, apparently primitive constructs are actually technologically advanced devices. A shield generator, ancient godlike computer, or powerful superweapon may resemble a monument, or idol, a small handheld artifact. Rock faces will hide glowing energy conduits. Crystals can do anything from teleporting people and objects to enhancing latent psychic powers. Carved stone tablets contain hidden machinery, or Nanotechnology, or some other Applied Phlebotinum. Ancient control centers and consoles will resemble temples and altars. In many cases, the technology is designed to mimic the appearance of Magitek but is actually Applied Phlebotinum. Usually the aliens in this first variation are Precursors, Ancient Astronauts, or both, and inhabit the higher end of the Kardashev Scale, but there are exceptions. Though being "Sufficiently Advanced" is usually a characteristic of the makers of such technology, it's not required: Higher-Tech Species are known to adopt this style as well. Civilizations at the Crystal Spires and Togas level are very likely to use this kind of technology, often subtly blending it in with their surroundings or by making it appear decorative. The Artifact of Doom or the MacGuffin in a Sci-Fi setting, if of alien or other fantastic origin, is usually an example of this technology. Many a Power Crystal and Mineral MacGuffin are examples as well. The more ancient Lost Technology is, the more likely it will be an example of this trope.

Often, you will know when this sort of technology is working because Power Glows. Also note that many of the examples involve some form of psionic crystal, or are combined with psionic powers. Many an Advanced Ancient Acropolis are filled with such devices.