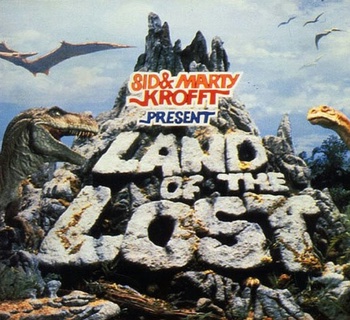 Land of the Lost is a 1991-1992 ABC Saturday morning children's program, and a remake of the 1974 series of the same name.
Advertisement:

Compared to the original it has a different theme song, a different family, a different design for the Sleestak, and better special effects that struck a different chord with a lot of people. It also features as a regular character a blonde-haired "wild girl" who grew up in the Land, and who, while never actually identified as such, could arguably be interpreted as the grown-up version of Holly from the series' first incarnation (indeed, that was the intention but casting choices led to this idea being dropped).

The Porter family — father Tom, son Kevin, and daughter Annie — are trapped in a parallel universe after their Jeep Cherokee fell through a time portal while exploring the back country.

Inside this parallel universe, the Porters come across an ill-tempered Tyrannosaurus rex known as "Scarface," a race of barbarian-like lizard people known as Sleestaks, and countless other dangers. However, amongst these dangers are a few helpful allies to the Porters. These allies include Christa, a beautiful cave-woman who was trapped in the Land of the Lost when she was a little girl, Tasha, a baby Parasaurolophus whose mother was killed by Scarface, and Stink, a member of a race of monkey-like people known as the Pakuni.

Creator/SidAndMartyKrofft were always fond of this trope, even as far as TheNineties!

Creator/SidAndMartyKrofft were always fond of this trope, even as far as TheNineties!