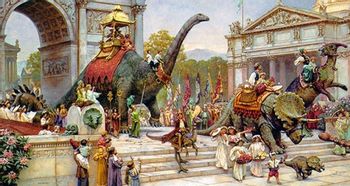 Most fiction detailing interaction between humans and dinosaurs portrays the relationship as purely antagonistic; dinos want to eat us, and we want to not get eaten. But that's not the extent of our interaction with most animals we actually deal with, is it? This trope is another way of imagining what that interaction might look like. What if we found a use for dinosaurs? Wouldn't it be cool if dinosaurs were kept as pets, mounts, or beasts of burden?

In theory, this trope is an aversion of Prehistoric Monster, since it presents dinosaurs as simply another class of animals. However, this is often mitigated by one of two major factors: either the dinosaurs turn out to be impossible to domesticate and run wild, demonstrating that they are not simply another class of animals but are uniquely dangerous, or the people keeping the dinosaurs are themselves characterized as cruel, brutal, and primitive, kindred spirits to their reptilian servants. In a fantasy context, Lizard Folk are especially prone to this latter trend.

Despite the name of this trope, it can also apply to any prehistoric animal - mammoths make a pretty popular substitute for War Elephants.

Given recent advances in scientific knowledge, birds are considered Living Dinosaurs and we humans have domesticated them. We even eat them on a regular basis. The most common real-life domesticated dinosaur is thus the chicken.

Also see Fantastic Livestock and Horse of a Different Color, as well as All Animals Are Dogs for when the dinosaurs act just like real-life pets, and Fluffy Tamer for the sort of human character who keeps these things around. Typically occurs in a 1 Million B.C. setting, a Lost World, in Medieval Prehistory, or as a result of Time Travel, but can also appear in a present-day setting with Living Dinosaurs. The dinosaurs may be treated as Fantastic Fauna Counterpart to varioius domestic animals. Related to Non-Malicious Monster and to an extent, Benevolent Monsters.