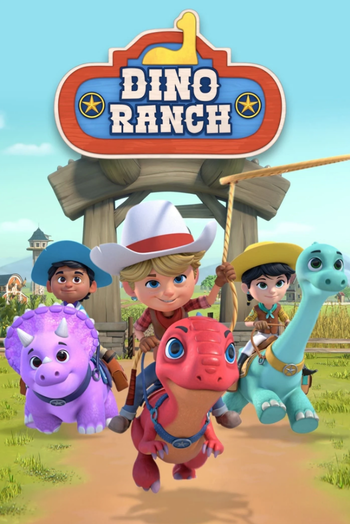 Dino Ranch is a Canadian All-CGI Cartoon aimed at preschoolers that debuted in 2021 on CBC Kids and Disney Junior. Produced by Jam Filled Entertainment (The Loud House) and Industrial Brothers (Top Wing), the series was created by Matthew Fernandes, who has a long history of making cartoons for CBC Kids, including Dex Hamilton: Alien Entomologist, Remy & Boo, and Kingdom Force.

The show is set at the eponymous Dino Ranch, home to Bo and Jane Cassidy, as well as their three kids Jon, Min, and Miguel. Dino Ranch is pretty much your typical stretch of farmland, except you won't find any cows, horses, or chickens. Instead, the Cassidy family ranch keeps dinosaurs. But running a ranch full of dinosaurs is never easy, and every day provides new opportunities for both adventures and lessons, as Jon, Min, and Miguel (as well as their dinosaur companions Blitz, Clover, and Tango) work hard, play harder, and learn about family, unity and taking care of the dinosaurs they love.

Tropes of the series