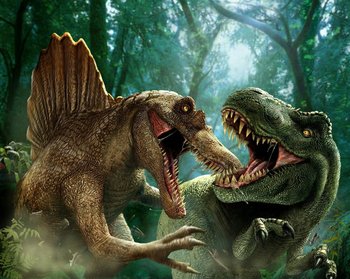 A rivalry 65 million (or so) years in the making.
After its appearance in Jurassic Park III made it famous, the Spinosaurus has become one of the stock dinosaurs and appears in plenty of media. However, because of its notorious fight against a Tyrannosaurus rex in the movie, it seems that pretty much every time a Spino shows up somewhere, it is required to have a confrontation with a T. rex. Every. Single. Time.
Advertisement:

Due to the Spinosaurus's victory from the movie being rather controversial to say the least, most (but not all) of the following fights have the T. rex winning instead, usually as an obvious Take That! to the film. For the same reason, the Spino tends to be often portrayed as the "villain" between the two dinosaurs (though this can also be partly attributed to the fact that the Spinosaurus has a more sinister, crocodile-esque appearance compared to the Tyrannosaurus).

Note that in Real Life, such a fight could never have happened considering the two dinosaurs lived at different periods (they were separated by over 30 million years), on different continents (Tyrannosaurus lived in North America while Spinosaurus lived in North Africa), and that since The New '10s Spinosaurus has been discovered to be an amphibious predator with tiny hindlimbs and finned tail. See here and here.

If such a fight between these two animals were ever to take place, it wouldn't be fair from the outset: the Tyrannosaurus would be heavily favored on land, while the Spinosaurus would dominate in the water. note  It bears mentioning there was another predatory dinosaur that coexisted with Spinosaurus named Carcharodontosaurus that was actually similar in size to Tyrannosaurus, and probably occupied a similar ecological niche. However, it doesn't have nearly the cultural pull the latter has, so this is rarely referenced. It also bears noting that while it did live at the same time and in roughly the same location, Carcharodontosaurus is believed to have lived in a different habitat (probably drier, more open terrain than the wetlands), and have hunted different prey than Spinosaurus (the former was an obligate carnivore that hunted other dinosaurs, while the other was a piscivore), so there likely wasn't much actual competition between the two.

See also Animal Jingoism, Behemoth Battle, Cool Versus Awesome, The Worf Effect (either the tyrannosaur or the spinosaur may fall into this), Stock Shout-Outs, Take That!, and Unpleasant Animal Counterpart (the spinosaur usually being the unpleasant one).

Compare Primate Versus Reptile, another Stock Shout-Out inspired by a fight scene involving a T. rex from a different movie. See also Savage Spinosaurs and King of the Dinosaurs for the combatants themselves.