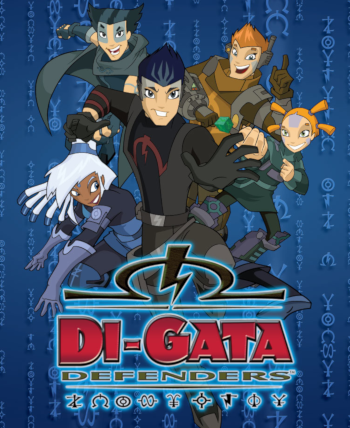 Counter-clockwise starting bottom left: Melosa, Seth, Kara, Erik, and Adam
"Great energy lay locked within the very bedrock of RaDos. The Di-Gata Stones were forged from this living rock, and engraved with the eight sigils of power - Nega, Yin, Yan, Ogama, Infinis, Dako, Sum, and Altas. The evil wizard Nazmul thirsted for the stones' power. Only the Di-Gata Defenders, legendary protectors of RaDos, stood in Nazmul's way. And even they could not stop the Megalith. All seemed lost, until a powerful spell was cast, binding the beast within four Pure Stones. Nazmul and his Order of Infinis were defeated, but... with great sacrifice. Fearing evil would rise again, the children of the Defenders were hidden away, to train for the day when RaDos would again call upon the Di-Gata Defenders."
Advertisement:

And so goes the exposition at the beginning of the first episode of Di-Gata Defenders a Canadian action/adventure/fantasy animated television series from Nelvana that was created by Canadian animator Greg Collinson.

But many years after the abovementioned events, the magic that imprisoned the Megalith is weakening, threatening to release Nazmul's terrible creation upon RaDos once more. Now, the four children of the Di-Gata Defenders have been let out into the world and tasked with again sealing the Megalith after having spent a long time in seclusion studying under the mentorship of Professor Alnar. Trained in casting the sigil-based power of Di-Gata Stones and commanding their Guardians (magical monsters linked to the power of Di-Gata Stones), the four teenage successors of the Di-Gata Defenders - Seth, Melosa, and siblings Erik and Kara - search for both adventure across RaDos and the Pure Stones containing the Megalith within.

As they travel the realm of RaDos, the four young Stone Casters will make friends and allies (such as rogue and fellow Stone Caster Adam) while also encountering enemies. Most dire of the latter category however is the newly-resuscitated Order of Infinis, now under the leadership of Nazmul's successor Brackus and his lieutenants Flinch and Malco, who seek to destroy the children of the Di-Gata Defenders and continue their master's work in using the Megalith. And for the new generation of Di-Gata Defenders, knowing just who is friend or foe is vital if these young heroes are to succeed in their mission to save their world.

Di-Gata Defenders premiered on Teletoon in Canada in 2006. New episodes of the show were broadcast from August 2006 to September 2008, with a total of 52 episodes over two seasons. The show also aired on Fox in the United States, as part of 4KidsTV

Nelvana started uploading episodes onto Youtube through their Cartoon Power Up channel in 2021. The playlist is here