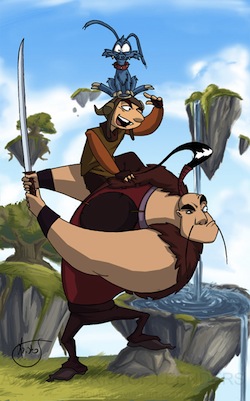 A short (two seasons in France, one and a half in The United States) 2004 French cartoon series that became a CGI film in 2008, created by Arthur J. Qwak.

The story is set in a World in the Sky, originally intended to be our own, millennia into the future, but later Retconned as being a different universe entirely with a mythological (?) dragon having caused the literal Big Bang (however, one may not exclude the other). There's a lot of dragons around, ranging from minor nuisances to sources of mortal danger, and the two protagonists Gwizdo and Lian-Chu are constantly searching for lucrative dragon-slaying jobs. It can be considered a Weird Thing from France, though it is notable in that they had gotten The Cure to do the theme song.

The series was shown on Cartoon Network on the weekends, but, as with a lot of their foreign-produced and acquired programming, received little to no promotion. This ensured that the series wouldn't last on the U.S airwaves. At the least, the movie was dubbed and released in the U.S.