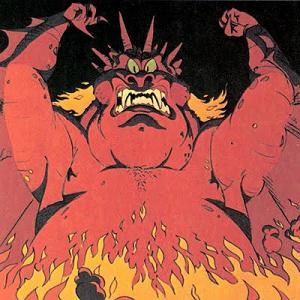 Guess which half of the title he is.
Advertisement:

It is about a pair of folk-singing country mice, Dan and Jan, who aren't pulling in money. However, Jan makes a contract with a shady... Reptile... Thing named B.L. Zebub and becomes a rock superstar. It turns out B.L. is really The Devil, and after Jan's greatest success, he comes for her soul at midnight.

The special inspired Nelvana to make the slightly better-known Rock & Rule - and the special is included in the deluxe DVD release of the film as well.

Fun fact: This is the very first production by Nelvana to feature their now-iconic polar bear logo.