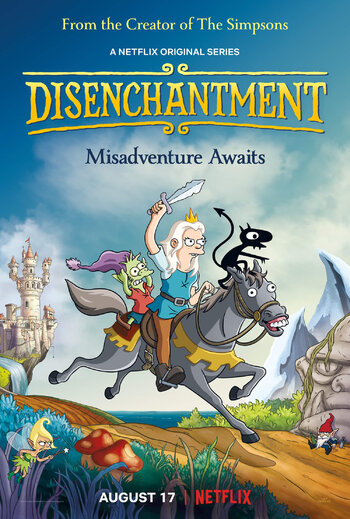 He took us to the present. He took us into the future. So what's next? The past, of course!
From left to right: Elfo, Bean, and Luci.
"An epic tale of growing up in the dark ages."
—Tagline
Advertisement:

Disenchantment is an animated Medieval fantasy-dramedy created by Matt Groening for Netflix. It is his third series overall, and his first to air exclusively on a streaming service. The premise is simple: The Simpsons was his take on the present day, Futurama was the future, and Disenchantment is the past.

The show follows the magical misadventures of Bean (short for "Tiabeanie") (Abbi Jacobson), a rebellious young princess from the medieval kingdom of Dreamland. Tired of being bossed around by her controlling father King Zøg (John DiMaggio), she strives to follow her own path in life... and by that, we mean getting blind drunk and committing acts of devilry. She soon befriends a couple of strange companions: a goofy, naive elf named Elfo (Nat Faxon), and a devious, snarky demon named Luci (Eric Andre). Along the way, the trio encounter ogres, sprites, harpies, imps, trolls, walruses, and lots of human fools.

The series is more serialized than Groening's previous shows. Beware of spoilers, which may or may not be hidden.