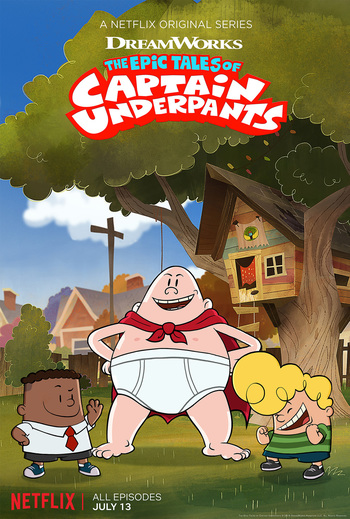 So George and Harold make comic books
(We're cool!) (Me, too!) Season 4  in SPACE!
But they had a mean old principal Season 3  Now they’re summering at summer camp
Who told them what to— Season 3  And Mr. Krupp is, too! S 4  in SPACE!(Blah, blah, blah, blah!)
So they got a Hypno Ring
And first they made him dance Season 4  before they went to space
Then accidentally, kinda on purpose
Turned him into Captain Underpants (Tra-la-laaaa!) Season 4  (Tra-la-SPACE!)
With a snap, he's the Captain
Not the brightest man Season 3  Flying through the trees Season 4  in SPACE!
And don’t forget when he gets wet
You’re back where you began! Season 3  You're sure to feel the squeeze! (Blah, blah, blah!)
Put it all together
What could possibly go wrong?
Now this is the end of the Captain Underpants Season 4 in space song!
(By George Beard and Harold Hutchins.)
Tra-la-LA! Season 3  Tra-la-CAMP! S 4  (Tra-la-SPACE!)
— The Expository Theme Tune
Advertisement:

The first few episodes tend to center on George and Harold creating a comic book whose main villain would inadvertently become the Monster of the Week. However, as season 1 progresses, an overarching plot becomes evident, which leads to this formula being mostly abandoned (at least, the comics and the villains aren't quite as connected as they were previously).

The Epic Tropes of Captain Underpants:

"You crossed the line, man!"

Nobody at school likes the comic George and Harold use to mock Erica.

"You crossed the line, man!"

Nobody at school likes the comic George and Harold use to mock Erica.