Toys / Ever After High 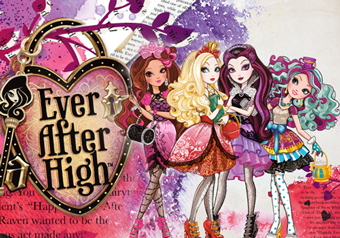 The End (is just the beginning...)
From Mattel comes the Fractured Fairy Tale spinoff of Monster High: Ever After High.
Advertisement:

In the enchanted world of Fairy Tales, the plot rules the entire universe: every story has a princess or other fairy tale protagonist; an evil queen, a dastardly villain, and/or a terrible monster; and there is always, ALWAYS a Happily Ever After.

To help ensure that this cycle is never broken, Ever After High was established. Run by Headmaster Grimm (and observed by his less by-the-book brother), staffed by the fairy godmothers and fairy tale personae of old, it ensures that the newest generation of Fairy Tale protagonists and antagonists follow the exact same route as their parents, ensured through a magical ritual called Legacy Day.

Problems start when Raven Queen, daughter of the Evil Queen from Snow White, doesn't WANT to become an evil queen. With the cycle threatened, her fellow characters' tales jeopardized, and Happily Ever After no longer a sure thing, this school year promises to be one to remember... not to mention a certain extraterrestrial friend.

In addition to the toys and video content, the series is gaining an Expanded Universe with two book series, one by Shannon Hale and the other by Suzanne Selfors. A Netflix series premiered on February 6, 2015.

The majority of the franchise was quietly discontinued in 2017 after a few years of disappointing sales, and Mattel re-focusing on the Monster High note Which would also get quietly cancelled the next year. and Enchantimals franchises. Mattel officially announced the cancellation on their Twitter in 2018. Dolls have left stores, and the cartoon series has ceased as well, with only Once Upon a Twist books being released on an irregular schedule afterwards. The official Youtube channel also uploads regularly as well, but it's only reposts and compilations of previous material.

Advertisement:
Stories in the Franchise: