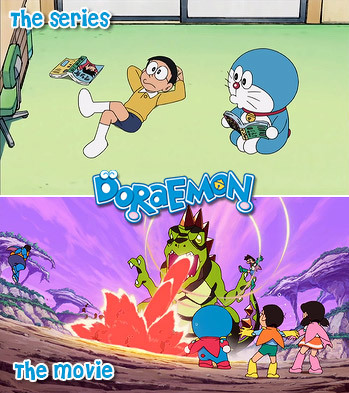 This trope refers to the habit of movies based on TV shows casting the main characters as being involved in a dramatic plot, particularly when nothing remotely similar happens in the series itself. This can be as big as the world or as small as recess, just so long as it is made "epic". Oddly enough, often seems to involve neighborhoods being torn down to build shopping malls.

Due to the fact that nearly all movie adaptations use this trope to some degree (after all, it's easier to keep up an epic tone across a 90-minute movie as opposed to a 13-52 episode season), examples shall be limited to things that involve a large change in dynamic.

Can sometimes overlap with Summer Blockbuster, but is distinct from an Epic Movie, which is inherently epic to begin with. Sequel Escalation is a similar phenomenon.

Examples of films adapted from: