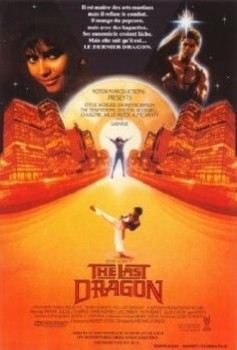 "Who's the master?!"
— Sho'nuff
Advertisement:

A 1985 Blaxploitation/Kung-Fu movie, in which the pious martial arts student Leroy Green (AKA "Bruce Leroy") who, having practiced and studied for years under his Master's patient tutelage, finally attains the pinnacle of skill possible while a student. To finally achieve his pursuit of "The Glow", a manifestation of perfect kung fu, Leroy must leave his master's supervision and go out into the world and reach this "final level" on his own.

Along the way he saves the local distressed damsel, and goes up against the villainous duo of Sho'Nuff, the Shogun of Harlem, and white business mogul Eddie Arkadian.