Film / The Kid Who Would Be King 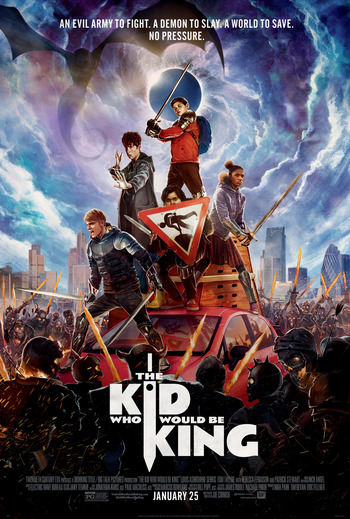 The Kid Who Would Be King is a 2019 fantasy adventure comedy, and the second feature film from writer/director Joe Cornish (Attack the Block).
Advertisement:

Set in modern day Britain, 12-year-old Alexander Elliot (Louis Ashborne Serkis, son of Andy) comes across the legendary sword Excalibur and pulls it from a stone. He soon learns from the wizard Merlin (Patrick Stewart as an old man, Angus Imrie as a teenager) that the dark sorceress Morgana Le Fay (Rebecca Ferguson) will rise from the underworld and bring about a terrible evil unto the world. Alex joins forces with his best friend Bedders (Dean Chaumoo) and bullies Lance (Tom Taylor) and Kaye (Rhianna Doris) to become knights and defeat Morgana.

Not to be confused with The Man Who Would Be King.

The physical release was on April 16, 2019, making this film the first home media release after Disney's purchase of 20th Century Fox.