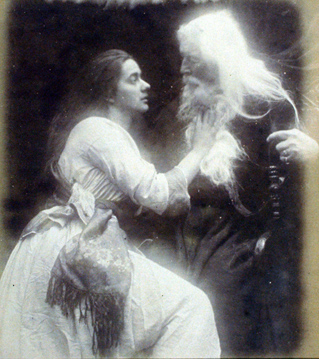 Now that we're lovers, I'll teach her everything I know. What Could Possibly Go Wrong?
"Nimue will come along and I'll go panting after her like a dog-fox in heat. I'll teach her too little magic to do her any good, and too much for my safety, all while trying to get into her petticoats. And then she'll entice me into a cave, and bind me with my own magic, and leave me to rot."
— Merlin discusses the trope in The Books of Magic
Advertisement:

At the most basic level, this trope is about a partnership between two magic-users where one is older (and thus usually the master/teacher or the more powerful member of the team), and the other member is younger and the apprentice type figure. And more often than not, they're of opposite sexes.

Now, if the relationship is being looked at closely, obviously there are a lot of potential tropes that could come into play for various factors, including the possibilities for communication difficulties with two people of different age groups, (sometimes) of opposite sexes, not to mention all the possible love and sexuality tropes that can potentially come into play.

Oh, and there's one more thing we forgot to mention: there's a good chance that one member of this team will betray the other, usually for greater power, in order to learn the legendary Dangerous Forbidden Technique, or to Take Over the World. In the process of doing so they often either become the story's Big Bad or The Dragon, or the other character's personal Arch-Enemy. Which rather puts a damper on their relationship...

The Trope Namer and probable Trope Maker is the Arthurian Mythos, where Merlin had a habit of teaching magic to younger women. In the oldest stories his pupil/lover's name was Nynave (this is often changed to Nimue and sometimes changed again to other names, with Vivien/Vivianne being the most common), and she eventually betrayed him and bound Merlin in a tree, a rock or a cave, depending on the version of the story you're reading or watching. (As a small note, if you're not an expert on Arthurian legend and are wondering why you don't hear about this character all that often, these days she is often combined or interchangeable with either The Lady of the Lake, Morgan le Fay, or Morgan's sister Morgause, the mother of Mordred.)

Now, all you need to qualify for this trope is the pair of magic-users with the age and (sometimes) sex difference, and the other elements of their relationship or betraying each other need not be there at all. However, whether consciously or not, most writers tend to end up using at least some and often all of the elements present in the Trope Maker. This leads to the being a lot of different variations on this theme, and a lot of possible ways to play and present them.

Note that this trope often involves betrayal, Face Heel Turns and death, so there may be spoilers unmarked.