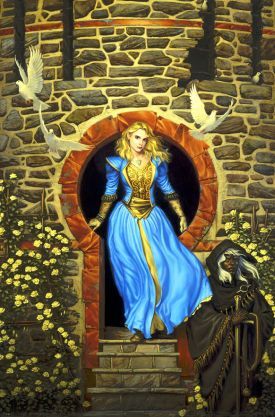 The Exiles is the unfinished trilogy by Melanie Rawn. Set on the planet of Lenfell, what has been written follows the trials of the three Ambrai sisters, Glenin, Sarra and Cailet as they proceed to bring about great social and political change in their society, with a lot of death and destruction in their wake. So far only The Ruins of Ambrai (1994) and The Mageborn Traitor (1997) have been published, with The Captal's Tower as yet unwritten. It seems very unlikely that The Captal's Tower would ever be finished, as Rawn has publicly stated she's forgotten some of the plot points and backstory. On July 23, 2014, she announced

that as soon as she was finished with writing the fifth Glass Thorns book, she would begin work on The Captal's Tower, citing her struggle with clinical depression as the cause. Unfortunately, Rawn went on to break her wrist, further delaying the project, and has spoken about being concerned about "not liking the mental state" she was in during the writing of the first two books, and her concern about falling into that same state again if/when she were to start work on the third.