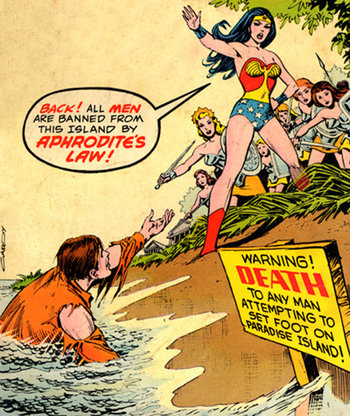 "He has washed up on our beach by happenstance, barely clinging to life! KILL HIM!"
"Only female Zone Troopers are allowed to enter Ador!"
— Otherworld, "I Am Woman, Hear Me Roar"
Advertisement:

Considering the large number of male-dominated societies in existence, it is understandable that fiction is open to the idea of the women occasionally wielding ultimate power. Lady Land extends the idea to an extreme level.

In a Lady Land, the population is predominantly female. Males may be considered inferior, used as sex slaves, or even expelled or murdered. This may create problems by leaving said society with no obvious method of reproducing outside of the sex slaves option. There's a very good chance that this issue will be brought up in-story, along with the issue of what happens to any male children born in a no-males zone. Some stories explore how a culture is affected by the absence of men by giving the characters other motivations. Other stories take it to the Logical Extreme as an Author Tract of how women are better off without men or how the all-woman civilization would crumble if men weren't there to help them. The first genre is known as "lesbian utopia

" as it can appeal to a group of women without attraction to men.

This is a common portrayal of Amazon societies dating back to the original Amazons of Classical Mythology. While some Amazons were presented as heroic, the Greeks also often tended to depict their society as a whole as Straw Feminists to "demonstrate" why women should Stay in the Kitchen and not be allowed any power at all.

If there are no males at all, this becomes a One-Gender Race. Naturally, a proper Lady Land will be ruled by a Matriarchy. See Improbably Female Cast for when the cast is mostly or entirely female without an adequate explanation in the setting. Contrast No Woman's Land, the male chauvinist counterpart which is almost always depicted negatively. See also Persecution Flip, which is likely to happen if the Lady Land is overtly hostile to men. Compare The One Guy featuring a male character in this scenario.

Not to be confused with the electric variety.

Home to the all female Kuja tribe.

Home to the all female Kuja tribe.