Film / I Am Not an Easy Man 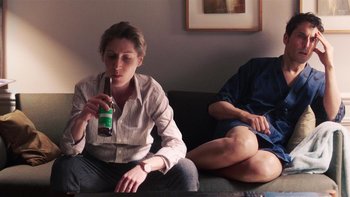 "Spare me the masculinist babble!"
— Alexandra

I am not an easy man (original title: Je ne suis pas un homme facile) is a thought-provoking Fantasy Romantic Comedy directed by Eléonore Pourriat, and the second French language feature film produced by Netflix, being preceded by July Hygreck's Blockbuster by a mere month. It was first available for streaming on the platform in February 2018.

The plot follows Damien (Vincent Elbaz), a successful, 40-year old Parisian publicist, a confirmed bachellor and proud womanizer, who after being knocked out in an accident, wakes up in a world very much like the one he left behind... except that traditional gender roles have been turned on their heads, and Damien is now the victim of the same sexist prejudices he had unashamedly utilized himself his whole life. In this world, women dominate society, politics, and religion, they dress in comfortable two-piece suits and are expected to bring home the bacon. Meanwhile, men are pressured to watch their appearance and show (shaved) skin until they find a woman, or are prevented from having successful careers in order to become homemakers and childrearers.

Damien leaves his job after being the target of unwanted sexual advances by his (now female) boss and has to become the personal assistant of Alexandra (Marie-Sophie Ferdane), a celebrity novelist and unashamed female chauvinist. Despite Alexandra behaving much like Damien did in his previous life (or because of it), Damien falls in love with her, and she seems to reciprocate. However, she is actually milking him for inspiration to write her new novel, I am not an easy man, and plans to dump Damien as soon as it is finished.

, a 2010 Short Film by Pourriat that had the same premise and made Netflix approach her with an offer to make this film. Also compare the Indian web series Men's World and the comic series Y: The Last Man.