Film / I Am Mother 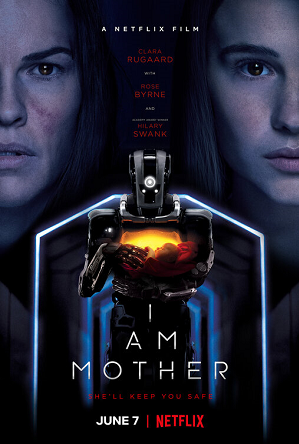 I Am Mother is a Netflix original film directed by Grant Sputore and written by Michael Lloyd Green in their feature film debuts. Released in 2019, it stars Clara Rugaard and Luke Hawker with Rose Byrne and Hilary Swank.

After an extinction-level event, a lone robot raises a human girl from an embryo in an underground bunker. With only her robot Mother for guidance and social interaction, the Daughter excels at her studies in preparation to rebuild the human race from the bunker's stock of embryos. On the Daughter's 16th birthday, however, the arrival of another human refugee into the bunker challenges the Daughter's conception of what's really going on.

Please note that not all spoilers may be hidden.