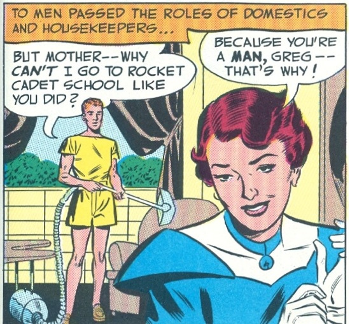 An example of the Patriarchy Flip subtype.
Advertisement:

Some societies are thought to exist as matriarchies, where women hold power and rule over society, both in modern day and historically. However, in fiction, the first known fictional matriarchies to be described in any detail were called "gynæcocracy", and was hypothesized by Aristotle and Plutarch, but Amazons go back even further, to Homer. They usually vary widely from supposed real-life matriarchies, and can be considered separate.

The treatment of matriarchies varies from author to author and by time period, but they tend to follow a few major patterns.

Note that if the society is ruled by a queen, the succession of the crown has to be either solely or at least preferentially down the female line — otherwise it's just Heir Club for Men or (in the case of equal primogeniture) an aversion thereof. Also note that a society may be matrilineal (descent is traced through the female line), matrilocal (husbands join/reside with their wives families), or matrifocal (where fathers have little or no role in family life and child rearing) while still being a patriarchy. Matriarchy is solely about women having power in government and society.

A Lady Land will generally fall under either the Patriarchy Flip or the Straw Matriarchy type.

Many instances of Bee People are matriarchies, due to the social structure of real life bee colonies.

Examples of a Patriarchy Flip

Examples of a Straw Matriarchy

Examples of an Enlightened Matriarchy

Examples of a Sexy Matriarchy

Examples of an Original Matriarchy

Examples of a Matriarchy in name only