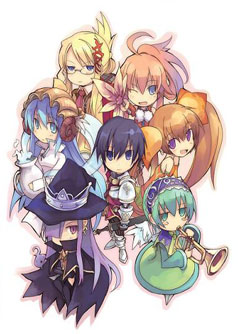 The Hero and his Witches.
Known as Luminous Arc 2: Will in Japan. It's the second game in the Luminous Arc Turn-Based Strategy series by Imageepoch in 2008.
Advertisement:

Set in a land where Magitek supports everyday life and civilization. Peace is maintained by the Knights of Carnava and the Magic Association. However, the peace is threatened when the Beast Fiends start to appear and begin destroying everything in their path. Not only that, some time before the game started, the Shadow Frost Witch, Fatima, goes rogue and begins the Witch Conflict against the Magic Association.

The game starts with Roland, along with Rasche and Rina, patrolling the streets after training. He later runs into Althea, a young Fire Witch-in-Training, who was delivering a letter to Queen Sophia from the Magic Association's leader. She is doing this while being chased by Josie, a cat familiar, and his magically summoned Golems.

When they escape into Rina's older brother's, Steiner, lab, they meet up with him and ready themselves for battle. However, the Runic Engine, Steiner's grand invention, was unintentionally embedded into Roland's hand and made him the first Rune Knight in 4000 years. Thus, began his mission to end the Witch Conflict.

This game also provides a multiplayer mode, which hasn't been improved much.

Compared to the first game, Luminous Arc 2 can be seen as an surprisingly improved sequel with a better plot, character development and overall, comparatively better and much smoother in battles and gameplay interfaces. Heck, it even got a fast forward button!

Has a Character Page.

Just like Luminous Arc, it has a nice animated opening.