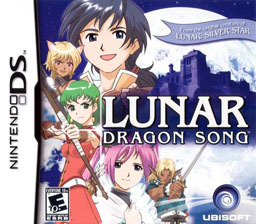 Lunar: Dragon Song (known as Lunar Genesis in Europe and Japan) is an isometric Eastern RPG released in 2005 for the Nintendo DS, and represents the first original installment (excluding remakes) since 1996 in Game Arts' Lunar series. It was developed by Japan Art Media, who also developed the remakes of Lunar: The Silver Star.

The story takes place one thousand years prior to the events of Lunar: The Silver Star, in a world divided between two races: the strong-bodied Beastmen, who have built magnificent cities, and the weaker but more ingenious humans, who dwell in quieter locales. The main character is Jian Campbell, an acrobatic human who loves to stand on his head. He and his partner, Lucia Collins, work together as couriers for Gad's Express to deliver packages to customers and fight off troublesome monsters. Being an intrepid pair of kids, they end up attracting the attention of the ruling beastmen and thereby get caught up in their war against the malevolent Vile Tribe.

This game is the Oddball in the Series; it introduced a number gameplay mechanics not found in the games that precede or follow it, mainly because they're all designed to make the game seem longer than it is. For example, the combat system toggles between two modes — Normal Mode for collecting items and Virtue Mode for gaining experience, no doing both at once like in any other RPG. This, combined with the game's scanty plot, lead to poor responses from fans and critics alike.