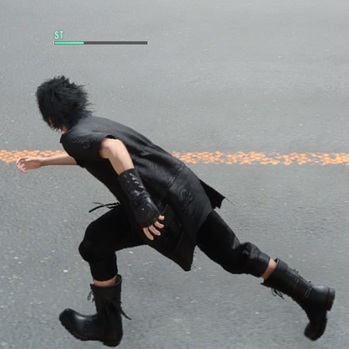 A brother to the Life Meter and Mana Meter, the Sprint Meter, or Stamina Points / Meter is a graphical depiction of some aspect of a player character's condition other than their remaining health. Generally, this represents stamina, and often more precisely their ability to run at high speed; when the meter empties, the character must either take a moment to catch their breath or be unable to run until it is recovered. This allows a game to put a limitation on a player's ability to flee from danger, which makes such meters popular for Survival Horror games.

A Sprint Meter can also be used to indicate the capacity for a swimming character to hold their breath (where it's called an Oxygen Meter) or other quantities. The defining characteristic of the Sprint Meter is that it refills automatically over time when it's not in use. Since dashing while swimming is often impossible anyway, the sprint and oxygen meters can share real estate on the screen.

See also Run, Don't Walk; compare with Nitro Boost, a temporary boost of speed. Stamina Burn is for when this meter's value can be lowered by non-player action or effects.