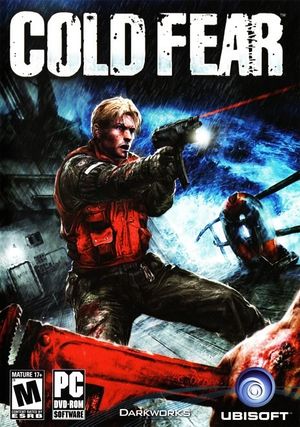 Tom Hansen is about to shoot you!
Advertisement:

In a ferocious Arctic storm, distress signals are sent from a mysterious Russian whaler. As leading Coast Guard veteran Tom Hansen, you board to investigate — and discover unthinkable horrors lurking beneath the ship's bloodstained decks.

Cold Fear is a Survival Horror game developed by Darkworks for Xbox, PlayStation 2, and PC. Originally intended as the fifth game in the Alone in the Dark series, the focus of the game was shifted early on in development to be an independent work. It was generally not-well received, and largely dismissed as a cash-in to Resident Evil 4, as it was released just a few months after and features similar combat mechanics. Other similarities include parasites that emerge from a zombie's neck after decapitation and a male protagonist with unusually pretty hair. Cold Fear is, however derivative, a respectable horror-action game in its own right.