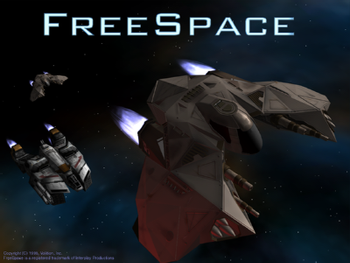 "When the Destroyers came for us, we attacked. Never had we been defeated. They were like the others: strange, hideous, resisting, fighting. Only these were not like the others. They did not die. We made our first retreat—we could forego one system. We left it to the Destroyers and went elsewhere. But they followed. They hunted us. They followed us when we retreated, discovered where we lived. For a long time, we did not know why they chased us. They were no ordinary enemy. They did not seek our territory, our technology, our resources.
Now we know our crime was sin."
— "The Ancient Ones, Part II

FreeSpace is a 1998 space sim developed by Volition and published by Interplay Entertainment. It is officially titled Descent: FreeSpace — The Great War (or Conflict: FreeSpace in European markets) for trademark reasons which are not worth getting into, but has no relation to the game Descent other than being published by the same company. The sequel is just titled FreeSpace 2.

In FreeSpace, the Galactic Terran Alliance is at war with an alien race called the Vasudans over a tragic miscommunication during first contact. Several missions in however, a new alien race called the Shivans suddenly appears and begins annihilating both sides. The Shivans possess technology far superior to either the Terrans or Vasudans. They cannot be reasoned with, they cannot be bargained with, they exist only to destroy. Facing extinction, the GTA and PVE join forces in an attempt to prevent the Shivans from locating Vasuda Prime and Earth. They are not entirely successful...

Set a few months later is Silent Threat, an expansion pack with a new plot, ships, and weapons. The story focused on the Galactic Terran Intelligence organization attempting a military coup in the aftermath of the Great War, centered around a new superweapon: the GTD Hades.

FreeSpace 2 takes place 32 years later. Cut off from Earth after the destruction of the Shivan's flagship Lucifer, and with Vasuda Prime a pile of burning glass, the Galactic Terran-Vasudan Alliance is embroiled in a civil war with Admiral Aken Bosch and his xenophobic, Vasudan-hating Neo-Terran Front. Then the Shivans return in force, effortlessly sweeping aside all opposition. Against a truly unstoppable armada, and a rogue admiral with a mysterious agenda, a desperate battle begins to seal the Shivan invasion in the Capella system.

The franchise ended there despite the incomplete story of the second game, due to a split between the publisher and the developer. However, in 2002, Volition released the source code for the game. The result of the fandom getting their hands on it is the FreeSpace 2 Source Code Project

(known by the fandom as the SCP. No, not that.). It is a single umbrella project dedicated to improving the original source code; the FS2_Open engine is the result of the project, and is much more powerful and flexible than the original game engine, with greatly improved graphics

as well as a plethora of new features for designers to utilize in mission-building, and it is still being improved to this day. This let to a renaissance of fan-made campaigns, new content including ships, weapons, and missions of incredible complexity with the FRED mission editor, the same one that Volition used to create the original game.

with the second game joining it