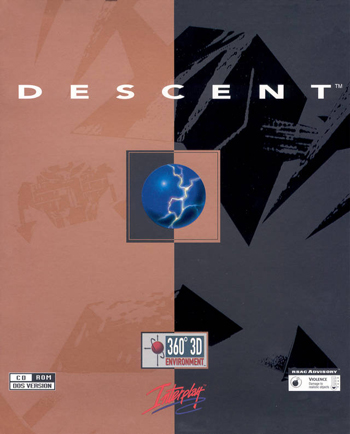 That is all, Material Defender. Prepare for Descent.
Advertisement:

Descent is a First Person Shooter Corridor Space Sim game series first developed by Interplay Entertainment and Parallax Software. The player controls the small, maneuverable, but heavily armed Pyro-GX Space Fighter and navigates confined networks of mines on various planets, destroying hovering mining-robots-gone-mad and rescuing hostages for points along the way in your mission to destroy all the mines. Yeah. That'll teach 'em.

In Descent (released in 1995), a representative of PTMC (Post-Terran Minerals Corporation) hires you, Material Defender, on a mercenary contract. The company's mining robots have been infected with The Virus, and the only solution is to flush out the mines by destroying the reactor in each one. You start on Earth's moon, progressing toward the sun via Venus and Mercury, then swing around to Mars and go all the way to Pluto and Charon and defeat the final boss, only to find that PTMC won't allow you to return to base, for fear that your ship might have received the virus. Descent later received a PlayStation port with some new levels, prerendered cutscenes, and new music. Ports to both the Sega Saturn and WiiWare were also planned, but did not materialize.

At the start of Descent II (released in 1996), you are contacted by the same representative from the first game (now with the name Samuel Dravis) and assigned a new mission. Same job, new mines. These mines are far more remote than the solar system, so a warp core prototype is installed in the Pyro in order to get there. After you've dealt with the final boss, it's time to "go home, get paid ... and sleep for the next two years." Unfortunately, your ship's warp core malfunctions at that very moment, knocks you out and dumps you into a random point in space. Descent II received a "port" in the form of Descent: Maximum for the PlayStation, which was essentially a new game with 30 new levels similar to the previous games' but smaller and optimized for the console.

The third game, Descent 3 (released in 1999), reveals that the warp core malfunction on your ship had sent you and your ship on a collision course with the Sun. A salvage vessel owned by a group of Technical Pacifists saves you at the last moment, but is unable to repair your ship and dumps it into the Sun. Katelyn Harper, the director of this group, tells you, shortly after you recover, that Samuel Dravis deliberately caused your warp core to "malfunction", in an attempt to kill you so that he does not have to pay you for your services. Harper also mentioned that the PTMC had started to test the very virus that you had been sent out to eradicate, in the hopes that they can harness its destructive power and use it for their own means. Harper presses you into her service in return for rescuing you from a certain fiery death. Descent 3 moved to larger, more open areas, overhauled the weapons selection system and tried to bring players from the now-dominant First-Person Shooter market in by making mouse and keyboard controls more playable. The plot also changed, with a plot and mission-oriented game instead of simply destroying reactors. Also, you are now fighting against the PTMC, on the side of your rescuers.

Unlike the original Doom, released only a year before the first Descent, and its derivatives, all three games feature the same vertigo-inducing, fly-anywhere, go-anywhere, there's-no-right-way-up, gameplay. Logical, in that the Pyro has fully functional antigravity, but for many players, these games represented the first time that they got actively carsick from playing a game.

The In Name Only game Descent: FreeSpace features an unrelated plot and was made by Volition, Inc. who split off from Parallax Software. Its expansion and sequel drop the title.

The trilogy is available for purchase on Steam and GOG.com.

A Spiritual Successor by the original developers, titled Overload, is released on Steam and GOG.com.