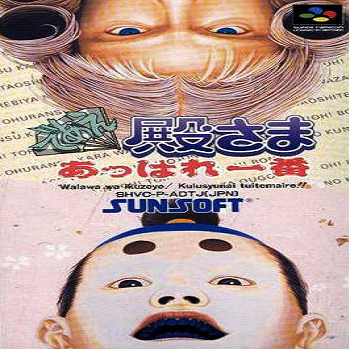 Deae Tonosama - Appare Ichiban (roughly, "Meet Tonosama! Alright! Number One!") is a weird title released by Sunsoft for the Super Famicom system in early 1995. The game is almost unknown, not only because it was never released outside Japan, but also because it was made when the SNES was almost at the end of its commercial life, so that only very few copies were produced: it has since reached high prices on eBay (up to $150 and more) because of this scarcity.
Advertisement:

DTAI plays almost like Pocky & Rocky: it is an overhead Shoot 'Em Up with two human characters who can jump, run, slide and kick ass with ranged and melee weapons. The main gimmick of the title is that our "heroes" can turn into their insanely over-powered fathers for a while before returning into their pathetic young selves, but apart from this it largely plays like the before mentioned title, including smart bombs and the simultaneous 2-player action.

The story: the main characters are a happy-go-lucky young feudal Japanese lord named Baka-dono ("Lord Stupid") and an equally young French nobleman named Baka-ouji ("Prince Stupid"... okay, you can sense where this is going). Japan is at peace now, but something is not right: the fathers of the two stupids, ashamed for their idiocy that is ruining their noble families, come back as ghosts and possess them, giving them all of their strength in moments of distress. And boy, will they need that: Baka-dono and Baka-ouji are going to uncover a nefarious plot that spans all over Japan, then around the world and finally into outer space... Yeah, we said this was a Widget Game.

Baka-dono is armed with a paper fan, and Baka-ouji with an endless supply of roses: by picking up certain icons, they will refill the TGR gauge, and when it hits 100%, they can turn into their hulking fathers and kick all kind of asses with their bare hands; however, in this mode every hit they take and every punch they land will decrease the gauge until it goes back to zero, and then they go back to normal.