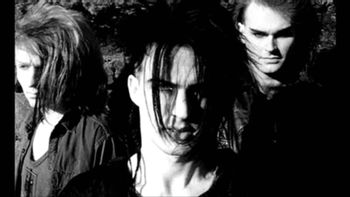 Skinny Puppy are one of the most influential bands in the field of Electronic Music. However, their mainstream success has been modest at best (a few hits on the dance music charts during The '80s). The impact of "Skuppy" comes primarily from the amount of artists they in turn have influenced.

The band was formed when Kevin Crompton (a.k.a. cEvin Key), drummer for the Synth-Pop band Images in Vogue, got bored with making Synth-Pop and wanted to make new and groundbreaking Electronic Music. He got his friend Kevin Ogilvie (a.k.a. Nivek Ogre), to provide vocals. Along the way, various other members have provided the role of third member, such as Bill Leeb (who went on to form Front Line Assembly), and most famously Dwayne Rudolph Goettel (who died of a heroin overdose in the mid-90s, causing the band to break up for almost a decade), and most recently Mark Walk.

Skinny Puppy are widely considered the band responsible for the more popular vibe Industrial has today, as opposed earlier Industrial, which was largely inaccessible to the average audience. Basically, they took the experimental and bizzare approach pioneered by bands such as Throbbing Gristle and applied it to almost-entirely electronic music. Unsurprisingly, their first releases, "Remission" and "Bites" (their first full album, released in 1985), sounded like experimental, angry Synth-Pop. Think of Skinny Puppy as "Kraftwerk (Trope Makers for Synth-Pop) + Throbbing Gristle (Trope Makers for Industrial)" and you'll have a good idea of what they sound like.

Skinny Puppy were not the first band to take Throbbing Gristle's attitude and approach Electronic Music with it. Arguably, Throbbing Gristle did this (albeit their work was more eclectic and less electronic than Skinny Puppy's), and Cabaret Voltaire (as well as many other acts associated with early '80s Synth-Pop) did it as well. But Skinny Puppy took these ideas into much Darker and Edgier territory and were easily the most influential partly because they had a truly gruesome stage act and never refrained from the use of Nightmare Fuel.

The band's second album, Mind: The Perpetual Intercourse, added Dwayne Goettel to the lineup. Goettel was a classically-trained keyboardist who also had a knack for extremely demented synthesizer and sampler programming. This is the classic lineup that defined the band during their golden age.

Their output was released on the Nettwerk record label and managed to influence a very large number of artists. One of these artists was Trent Reznor, who decided to combine Skinny Puppy's style with heavy riffs and rock-style vocals and lyrics (and, at times, increased use of guitars). The result was Nine Inch Nails. Trent Reznor himself acknowledges his inspiration, and the song "Down in It" off of "Pretty Hate Machine" is very similar to Skinny Puppy's "Dig It" from Mind: The Perpetual Intercourse. At one point in Trent's early career, Nine Inch Nails was the opening act for Skinny Puppy.

In 1989, Skinny Puppy released the album Rabies, which was (upon release) considered a New Sound Album because it contained metal-style guitar riffs on three tracks, courtesy of Ministry's Al Jourgensen (who had struck up a friendship with Nivek Ogre when the two bands were touring together). In hindsight however, most Skinny Puppy fans have got over the 'surprise' and embraced the album, partly because the song "Worlock" is considered one of Skinny Puppy's Crowning Moments and to this day remains one of their Signature Songs. Unfortunately, it was during this era that Al introduced the band to heroin.

In 1990, the band released Too Dark Park, which is arguably considered their artistic high point by the majority of their fans. The album is not the most bizarre and inaccessible of their works (that honor is reserved for 1988's "VIVIsectVI" (pronounced "Vivisect Six"), but it manages to approach it, with tighter songwriting, catchy basslines, and surprising sonic range that went from pure Mind Rape rhythmic noise (songs like "Convulsion") to dark ambient (like "Reclamation") to danceable, melodic and bizarre industrial (like "Tormentor") to darker and more minimal industrial (like "Nature's Revenge") to going between all these various different styles within the same song (like "Shore Lined Poison").

1992 saw the release of Last Rights, their last work for Nettwerk. This was a bizarre, dark album with lyrics influenced by Nivek Ogre detoxing from heroin, which caused tensions within the band as the other band members had not yet done so. Because of this, the lyrics were not released with the album. Clearance issues also prevented the planned inclusion of the song "Left Handshake", due to its lengthy sample of Timothy Leary navigating the listener through an acid trip (Leary himself was OK with the band's use of the sample, but did not own the rights); as a result, the liner notes state, "SONG 10 IS MISSING?" "Left Handshake" was ultimately released as a limited-edition single (although with its title slightly misspelled as "Left Hand Shake") that has been heavily subject to Keep Circulating the Tapes. Last Rights' first half is relatively conventional (by Skuppy standards) and its second half is substantially more experimental and chaotic. The lengthy final track, "Download", is also notable for featuring some of their hardest music in its first half and some of their most serene in its second half. Last Rights is one of their most acclaimed albums and was their first to crack the Billboard 200.

In 1996, the band suffered another Creator Breakdown after switching to a new label. They released what was believed to be their final album, The Process (a Concept Album about a psychotherapy cult known as the Process Church of Final Judgement), after Dwayne Goettel's fondness for heroin caught up with him and left him as a corpse at his parents' house.

In the early 2000's, Skuppy did a one-off reformation show in Dresden at that "Doomsday" festival. The two Kevins performed in front of a screaming crowd of goths and rivetheads; they left a spare spot on stage for Dwayne out of respect. This reformation resulted in new albums; 2004's The Greater Wrong of the Right followed by 2008's Mythmaker, 2011's much delayed hanDover, which incorporated more minimalist IDM elements, and 2013's Weapon.