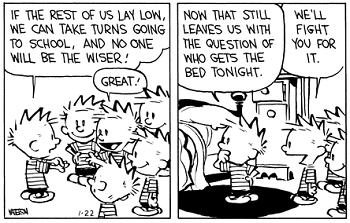 If they're gonna fight over who gets the bed, how well do you think going to school in turns will end up?
"The best thing about being me: there's so many of me!"
— Agent Smith, The Matrix Reloaded
Advertisement:

Through magic or super-technology, a character decides to get a large number of chores done via copying themself.

Expect the original to choose all of the fun things to do when assigning chores around. Sometimes the copies rebel or degrade, which results in either (1) at least one Evil Twin, or (2) copies continually being made to the point of risking exposing the Masquerade, or at least ruining the original's reputation.

These copies rarely count as persons in and of themselves. See Cloning Blues and Expendable Clone. If they are counted as people, expect Which Me?.

Compare with Doppelgänger Spin, Sorcerer's Apprentice Plot. Related to Gideon Ploy. Not to be confused with I Am Legion or Collective Identity. May be used in a Doppelgänger Attack. See also Literal Split Personality.

The superpower itself is Self-Duplication.

Asterix and Obelix clone themselves and give the Roman soldiers a threat not to be trifled with.

Asterix and Obelix clone themselves and give the Roman soldiers a threat not to be trifled with.