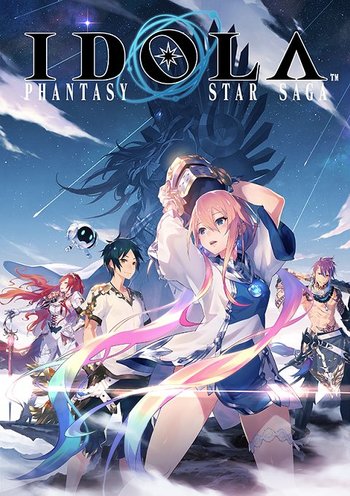 Will we ever find forever?note From left to right: Rosalinde, Pai, Uly, Stella, Jasper
Advertisement:

Unlike many of its predecessors, IDOLA: Phantasy Star Saga is a Free-to-Play mobile game in the Phantasy Star series developed by Appci and published by SEGA. It was released in Japan on November 27th, 2018, with Chinese and English versions released by Taiwanese publisher Boltrend Games. Contrary to the trend set by Phantasy Star Online, IDOLA prominently features a return to classic turn-based RPG gameplay as opposed to an Action RPG, and is thematically reminiscent of the original games in the franchise.

The world of Vandor is a faraway, magical land populated by six races: the Humans, Elves, Gnomes, Demonics, Machina, and Lycans. According to mythology, Vandor was assaulted one millennia ago by an Eldritch Abomination known as "Dark Falz", which was defeated with the aid of the mysterious "Starlord" who descended from the heavens and departed just as suddenly.

Now in the present day, there are two major powers in conflict across Vandor: "Law", the ruling caste who use the Runes passed down from the Starlord and heartlessly impose their order upon the populace; and "Chaos", who empower their bodies with the taboo magic of Crests and seek lives of reckless freedom. In addition, a handful of people possess a mysterious ability to transform into monstrous titans known as "Idola", which are all based on a major constellation (with the most powerful being the "Zodiates" of the Western Zodiac).

, starring the game's very own Virtual YouTuber, Poponanote who precedes her in-game counterpart, who hosts "IDOLA Channel", a video uploaded every two weeks at 11AM JST Monday and presents information on upcoming character releases and events in the game. On October 25th, 2021, the 116th episode of "IDOLA Channel" was uploaded, and is stated to be the final episode of "IDOLA Channel". Popona would later go on to promote Phantasy Star Online 2: New Genesis.

There is also a comedy web manga known as Yuru Idola, initially created to promote the game before spinning off into a second season called Yuru Idola R. The final installment of R was posted on October 26th, 2021.

The Japanese version of the game officially went out of service on January 13th, 2022, soon after the game's 3rd Anniversary Event. The final update added the last two units to the game: Victoria, and Farley (Assassin). Microtransaction services were halted on October 31st, 2021; the IDOLA Points service ended in December 2021; and the IDOLA Points Shop in Phantasy Star Online 2 ended service on January 13th. The game's main story cutscenes (as well as Bond Story scenes) are available to view through the game's YouTube channel following its end-of-service.