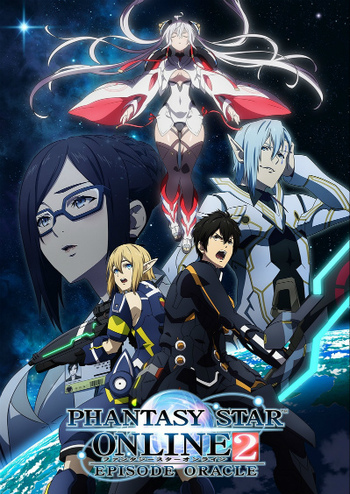 Return to where it all began.note Pictured: Ash, Afin, Xion, Luther, Matoi
Advertisement:

In a certain time, in a certain place, spacefarers discovered a miraculous source of energy known as "Photons", serving as both a source of light and a source of power. Using Photons as their foundation, these spacefarers built the Colony Ship fleet of Oracle for the purposes of space exploration, and they themselves became known as Photoners. No sooner did the Photoners discover Photons did the they discover the Darkers, Eldritch Abominations that exist only to corrupt and destroy. To fight the Darkers, the Photoners created three races in their image capable of wielding Photons: Humans, Newmans, and CASTs, and together they created the military organization known as "ARKS" (Artificial Relicit to Keep Species). With the power of Photons, the ARKS are tasked with discovering unknown reaches of the universe and eradicating the Darker threat.

Enter Ash, a recruit freshly graduated from the ARKS Cadet program. What is meant to be a ceremonial graduation exercise goes horribly awry when Darkers unexpectedly attack, alerting the ARKS to a massive spike in Darker activity across the universe. When Ash meets the enigmatic Xion, he and his allies soon find themselves at the center of a conflict that will change the destinies of ARKS, Oracle, and the very universe itself.