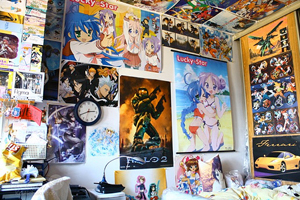 The owner of this room might be a bit of a fan of anime, Halo, and Ferraris. Or they might simply be very fond of posters.
"Pretty unique decorating style you have here, [Jason]. It's like, '12-year-old boy' meets '13-year-old boy'."
— Eleanor, The Good Place
Advertisement:

Giving clues to a person's personality through the decor of their bedroom, particularly wall posters.

A quick way of giving hints about a person's personality without spending a lot of time on exposition is to show their bedroom. This is particularly true from late childhood to college age, when people tend to have very idiosyncratic decorating tastes. (Before that, the child's parents/guardians tend to choose the decor, and as people mature, many of them feel less compelled to "mark their territory" quite so fiercely. And if a couple is sharing a room, it will tend to blend their tastes to an acceptable medium.)

The posters and other decorations of a bedroom can often convey such information as gender and approximate age, hobbies, religious affiliation, the region the story takes place in, approximately what year the story takes place, and the tolerance level of the parents if any (parents, that is). A change in posters can indicate a similar change in the inhabitant's interests or maturity level. (And whether they're torn down or gently put away tells the audience a lot about the feelings of the character.) If the set designers are careless, they can oversell the clutter effect, or create a false impression by putting all the things that were cool when they were kids on a contemporary teenager's wall.

For a twist, sometimes the posters will reveal the "true face" of a character, such as a burly Jerk Jock's room being plastered with unicorns and rainbows, while the Girl Next Door has decorated her room in Frazetta barbarian posters with black curtains and pagan symbols.

There are a number of poster stereotypes. For example, posters of Einstein, Che, Jim Morrison or some kind of Monet in a college student's dorm room. On the other hand, expect a Scarface (1983) poster in a gangsta-wannabe's room. In addition, a boy's room will nearly always be rather messy and will have at least one swimsuit model poster, while a girl's room will nearly always feature posters and magazine cut-outs of her favorite singers (heart scribbles optional), plus a vanity with mirror and cosmetics.

This trope is usually found in visual media, although print media will sometimes describe a bedroom's decor — and the conclusions the narrator draws from it.

Compare with Environmental Symbolism and Bad Bedroom, Bad Life. If the poster gallery contains one person, the room can double as a Stalker Shrine. Extreme examples may count as Room Full of Crazy.