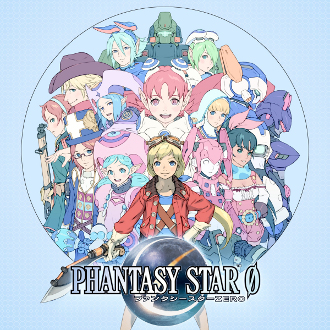 Shortly after the release of Phantasy Star Portable on the Playstation Portable, Sega decided to not leave Nintendo DS owners out in the cold. Thus came Phantasy Star Zero (written as Ø in North America), the second game of the Phantasy Star franchise on a Nintendo handheld console. (After the Compilation Rerelease of I, II and III on the GBA, of course.)

Released in late 2008 in Japan and late 2009/early 2010 for North America and Europe, Phantasy Star Zero brings back much of Phantasy Star Online's game mechanics and style (it is, after all, abbreviated PS0), with some minor improvements. Like both Phantasy Star Online and Phantasy Star Universe, it is a Massively Multiplayer Online Action RPG (on the DS!), but has a monthly cost of $0 (YES!).

The story begins on a nameless planet two hundred years after a mysterious calamity known as the Great Blank, which destroyed most historical records. The modern world is now a Cattle Punk Scavenger World where the last fragments of humanity do their best to live on.

However, this peaceful life is about to change: the Ridiculously Human Robots known as CASTs have begun to awaken from the slumber imposed upon them by the Great Blank, and an enigmatic group of Human Aliens called Newmans are descending to Earth for unknown reasons. The presence of these three races begins to move the gears that have been frozen for the past two centuries, and will reveal not only the cause of the Great Blank but determine the future of the universe.