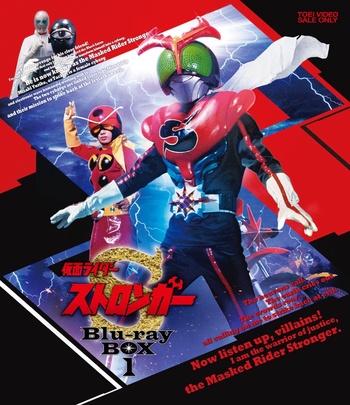 "The heavens cry out! The earth cries out! The people cry out! They cry out for me to destroy evil! Listen up, evildoers...I am the warrior of justice, Kamen Rider Stronger!"
"Kamen Rider Stronger, Shigeru Jo, underwent an cyborg surgery and become an electric human. He decided to fight the evil organization, Black Satan, in order to defend peace and justice throughout Japan."
— Opening Narration.
Advertisement:

Former football player Shigeru Jo allows himself to be captured and altered, becoming the Electric Human Stronger. When he is forced to pledge loyalty to Black Satan's Great Leader, he shows his true colors by calling himself Kamen Rider Stronger and escaping to seek out revenge against Black Satan for killing a friend of his. While escaping from their base, he rescues a woman who had been altered by Black Satan (but not brainwashed), Misaki Yuriko, who became the Electro-wave Human Tackle. She helps Stronger in his battle against the Black Satan organization.

Eventually, Black Satan falls before Stronger but he ends up faced with the Delza Army, composed of inhabitants of an underground kingdom. However, as it turns out, he wasn't the only one facing Delza's forces around the world...