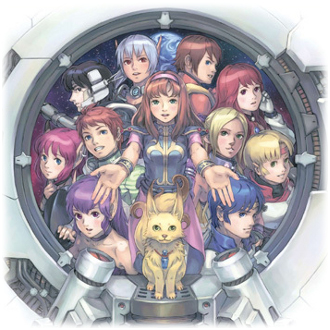 Saving the universe from Dark Force since 1987!
Advertisement:

Sega's answer to the RPG craze of the late 1980s, the Phantasy Star series was a classic contemporary to Dragon Quest and Final Fantasy. Having been in the hands of several of Sega's development studios (in chronological order: Sega RD4, Sega AM7 (Overworks/Sega Wow), and Sega AM8 (Sonic Team), the franchise has taken several different forms since its inception.

The original tetralogy of turn-based role-playing games is primarily set in the Algol solar system, focusing on the planets Palma, Motavia, and Dezoris. Across thousands of years, various heroes rise to combat those who would threaten their home worlds, particularly the evil entity known as Dark Force.

Three Gaiden Games, mostly focused on Phantasy Star II, were released as well. Phantasy Star II Text Adventures and Phantasy Star Adventure, a duo of text-based Adventure Games, explored the past of the PSII cast and told an unrelated story set in the same era of the Algol system's history, respectively. Phantasy Star Gaiden, an Eastern RPG for the Game Gear, took place roughly halfway between I and II in the Copto star system, a sector of space colonized by the Algolians. The protagonists are two colonists, Alec and Mina—the latter being a clone of I's heroine, Alis Landale. None of these games were released outside of Japan.

A number of times, the games of the tetralogy have been ported to newer consoles. At one point, there was even a Remake of the first two games in the tetralogy—Phantasy Star Generation 1 and Generation 2—for the PlayStation 2. On top of a more fleshed-out story (far more in Generation 1's case) and updated graphics, there were a few additional quests and tweaks made to the remakes. Of course, nobody outside Japan got to see these either. A similar remake of IV was planned and a US release bundling the three was announced, but the remake of IV disappeared and the US release along with it.

Sega's continued to make games in the Phantasy Star series, but they've largely taken place in entirely new settings with only tenuous connections to the Algol System... well, apart from the fact that Dark Force just can't seem to leave the universe alone. For more information on the sub-series that came after the tetralogy, see Phantasy Star Online, Phantasy Star Universe, and Phantasy Star Zero.

All four games from the original series are available on Sonic's Ultimate Genesis Collection for the Xbox 360 and PlayStation 3, though the first installment (because it isn't a Genesis game) must be unlocked, which isn't that hard to do.note Defeat the first boss of Sonic the Hedgehog 2 in two-player mode. As of 3 May 2012, the original versions of Phantasy Star II, III, and IV for Sega Genesis can also be purchased and played on PC via Steam, and as of 2018, the three Genesis games are available on Sega Genesis Classics for the PlayStation 4, Xbox One and Nintendo Switch.