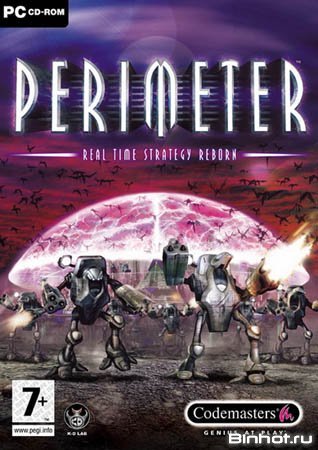 Perimeter is a Science Fiction Real-Time Strategy Game created by K-D Lab and released by Codemasters in 2004. An Expansion Pack, Emperor's Testament, was released by Paradox Interactive in 2006; a sequel, Perimeter II: New Earth, came out in 2009.

Perimeter had a number of notable gimmicks that make it stand out - the first being deformable terrain. In fact, Terraforming the land was a key part of anyone's essential strategies in the game, essentially becoming the Lumber resource in addition to a huge number of other tactical purposes. In addition, all of your buildings were linked by an Energy Grid. This grid powered buildings in a small radius, but its biggest boon was activating the titular Perimeter shield, an impenetrable defence shield that blocked any attacks for a short period of time. The final big gimmick was that there were basically three units - Soldiers, Officers and Technicians who shoot enemies, prevent enemies from attacking and healing your units respectively - but these units could be used to morph into more powerful forms.

The story is also unique for a Real Time Strategy game - A group of humans known as Spirits foresaw the destruction of Earth due to the ravages of our time, which lead to them discovering the Psychosphere - a realm of Human thought and imagination that also acts as a way to reach new worlds. As such, they build the keys to saving Humanity - the Frames - enormous City Ships housing the entire remaining population of the Human Race, and the Portals - which are used to travel the Sphere.However, all does not go to according to the plan. Eventually a rebellion on one of the frames violently overthrows the Spirits governing one of the Frames. These Rebels call themselves the Harkbackhood, and start proceeding back down the paths already created by the passing of the Frames. Eventually however, a third group is introduced, intent on creating a Cybernetic Empire within the Sphere itself.