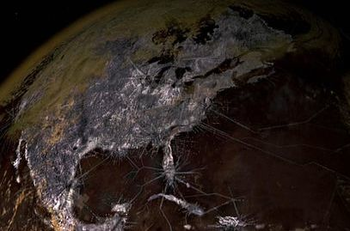 "The atmosphere contains high concentrations of methane, carbon monoxide, and fluorine. [...] Population approximately nine billion...all Borg."
"There is a notion called 'terraforming' that has held popular theoretical cachet for some time. It holds that given the correct level of technology, the potential is there to change the environment of another planet into one like our own. This is nothing the human race has yet been able to put into practice. It's never been considered that someone might do it to us. These central positions look less and less like someplace a human could survive. They have been un-terraformed."
— Narration of the "Terraform"

Imagine you are a leader of an alien race currently at war with another race, and your natural habitats are drastically different. How would you perform a hostile takeover of a planet?

By making it so the planet is now inhabitable by you and not by the natives, of course! Convert the atmosphere, reshape the land and sea, overrun the native ecosystem with one more suitable — whatever is necessary to make the very ground your enemies tread on no longer their ally. If successful, this can turn the targeted planet into a Death World.

A specific context for Terraforming, and if it's Earth or an Earth-like world being changed to another ecosphere, the term would be "xenoforming". Often overlaps with Atmosphere Abuse, though the latter doesn't have to occur specifically for terraforming purposes. Depending on methodology, it can involve Grey Goo, Gaia's Vengeance, The Night That Never Ends, Alien Kudzu, or Meat Moss. Due to the destruction, this is an Apocalypse How of the Planetary Species or Total Extinction variety, depending on how much of the planet's multicellular life is replaced.