Anime / Godzilla: Planet of the Monsters 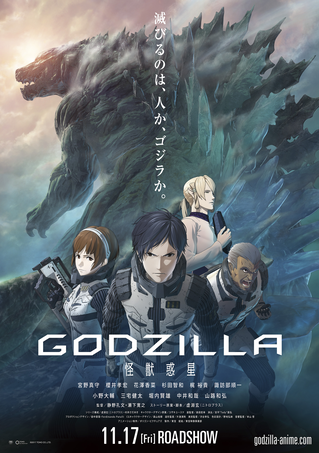 Who will survive? Humanity? Or Godzilla?
So, you showed yourself at last. Since we saw each other, it has been 20 years for us, and 20,000 for you. It's been a long time. Oh King of Destruction.
— Metphies
Advertisement:

Godzilla: Planet of the Monsters is a 2017 post-apocalyptic Kaiju anime film based on the Godzilla series produced by Toho and animated by Polygon Studios. It is the first anime adaptation of the title character (or at least second) and the fourth Godzilla animation since Godzilla: The Series and is written by Gen Urobuchi, the well-known writer of Fate/Zero, Puella Magi Madoka Magica and Psycho-Pass and co-directed by Kōbun Shizuno, the director of the Case Closed films, with character designs by Fire Emblem and No More Heroes artist Yusuke Kozaki. The soundtrack is composed by Takayuki Hattori, who has two Godzilla films under his belt, these being Godzilla vs. SpaceGodzilla and Godzilla 2000.

When Godzilla and a legion of monsters emerged towards the end of the 20th century and drove humanity off of Earth after a 50 year war, the new planet that humanity was hoping to settle on turned out to be inhospitable. A faction wanting to return to Earth and take out Godzilla, led by a young man named Haruo, ends up taking political control and engages on a mission to return to Earth and kill Godzilla... only to emerge 20,000 years later, where Earth is overgrown and Godzilla reigns supreme.

A manga adaptation was released in March 2018, which features expanded content.