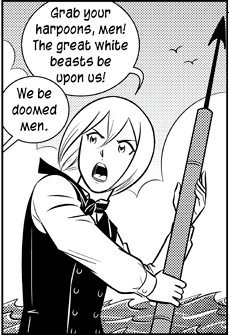 If you think Ahab is mis-cast, wait until you see the white whale.
"I hate metaphors. That's why my favorite book is Moby-Dick. No frou-frou symbolism, just a good simple tale about a man who hates an animal."
— Ron Swanson, Parks and Recreation
Advertisement:

Moby-Dick is considered one of the timeless classics of literature, yet many people today are more likely to have seen homages to its central Determinator vs. Animal Nemesis conflict than to have actually read the novel. A number of works, particularly animated ones, have paid tribute to this book and its cinematic incarnations, setting a tremendous, pale-colored whale or whale-analog against an obsessive opponent who'll stop at nothing to bring it down.

As not many works utilize a maritime setting, this trope is often Recycled IN SPACE!.note In which case, they may be hunting a Space Whale. Or deserts.note Where they'll be hunting a Land Shark or possibly a Sand Worm. Or freshwater. Or the sky. Subverting the original ending so that both antagonists survive, with the pursuer coming to respect the pursued, is likewise common.

Sometimes a Whole Plot Reference, other times a Shout-Out or Homage. Actual adaptations of Moby-Dick, character names and all, are more remake than Moby Schtick, even if they happen to be Recycled IN SPACE!.