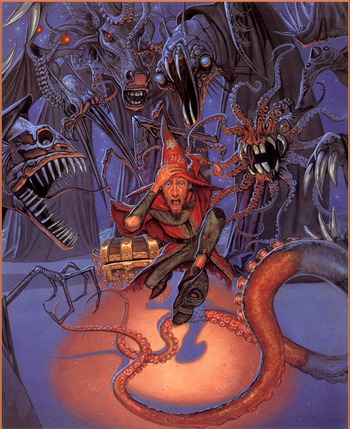 "Stercus, stercus, stercus moriturus sum!"note "Shitshitshit I'm gonna die!"
"A little piece of advice. You see an Agent, you do what we do. You run. You run your ass off."
— Cypher, The Matrix
Advertisement:

Sometimes our heroes are faced with a foe they simply cannot withstand. Not only is it a fight they cannot win, it's a fight they have no hope of even surviving. There isn't even a way to win by dying. They have two options: run away, or be butchered.

This enemy is usually rare and always notorious. Its very presence may inspire panic. Perhaps they're The Dreaded, or even the Hero Killer. Perhaps it's not an individual, but The Swarm or The Corruption. In any case, anyone who fights it is screwed, and anyone who could possibly end up fighting it knows it.

The key to this trope is that the threat is very powerful, but also impossible to predict. After all, if you can see it coming and avoid it, then it's not very scary, is it? But when it could show up almost anywhere, virtually without warning, and there's nothing you can do but hope to escape, then that's terrifying.

Of course, none of this will keep our heroes from fighting it sooner or later. If encountered early in the story, it may require a Heroic Sacrifice from one character to allow the rest to escape. If the sacrificial character is wounded, he may insist that I Will Only Slow You Down; either way, expect him to tell the enemy that You Shall Not Pass! before making his Last Stand. If no sacrificial characters are available, then someone may show up unexpectedly and tell the heroes to Come with Me If You Want to Live. If the foe isn't fought until later in the story, it will probably be after the heroes have discovered its Achilles' Heel, or somehow dramatically increased their Power Levels (through a Super Mode, Dangerous Forbidden Technique, or whatever), and it will still be a difficult fight. If it's fought both early and late, then the latter fight will be a Heroic Rematch.

In Video Games, may be a Hopeless Boss Fight where dying doesn't result in the plot continuing. If the only option you ever have is running, then it's probably an Endless Running Game. Compare Don't Ask, Just Run and Indy Escape.

Mario has to run away before the walls close in on him. No way this is legal in a theme park.

Mario has to run away before the walls close in on him. No way this is legal in a theme park.