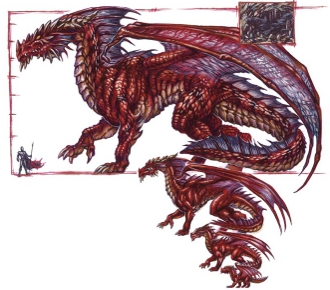 Everyone knows a child is more durable than a newborn, and that an adult is tougher than a kid. However, for humans it stops there — we might get Older and Wiser, but from middle age onwards we begin to physically deteriorate. Some creatures... don't. They never grow decrepit. Arthritis never settles in. They keep growing stronger, faster and more resilient with each passing year, and in some cases they keep growing bigger as well. They're not simply more powerful due to having more experience: they are literally tougher than any younger specimen of the same breed.

Vampires, dragons, and wizards are three of the most common beings to exhibit this, with ancient dragons and elder vampires possessing terrible power, and older wizards invariably commanding greater arcane might than their younger fellows — especially when Wizards Live Longer. This can cause a bit of Fridge Logic if the creature is stated not to be immortal: if dragons become more resilient as they age, then just how do they die of old age? The answer could be the Square-Cube Law — except when they don't die of old age at all.

A subtrope of Older Is Better. See also Monster Lords, who are often older members of their species, and contrast Evil Makes You Monstrous (for the latter, they get eviler with age and thus get uglier and stronger). For the human equivalent, see the Old Master, Old Soldier, and Sickly Child Grew Up Strong. Often overlaps with the Monster Progenitor and Mother of a Thousand Young, who are the first in a line of monsters and are thus the strongest of their kind. See also Gigantic Adults, Tiny Babies,

May result in a Years Too Early insult by one to a younger one.

Not to be confused with what happens to certain cheeses, wines, and socks.