Spoilers for Dragon Ball Super, as well as all Dragon Ball works preceding this one, will be left unmarked. You Have Been Warned! 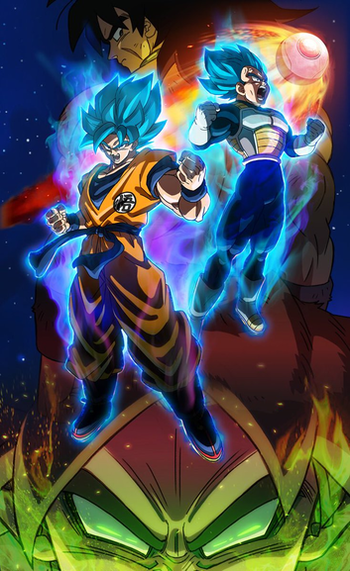 "The Greatest Enemy, a Saiyan."
"We've had our fair share of enemies, trust me. But, I don't think that you're one of them. For some reason, I can just tell."
— Goku, talking to Broly
Advertisement:

Dragon Ball Super: Broly is the 20th Dragon Ball movie, and the first under the Dragon Ball Super banner. It was released in Japan on December 14, 2018, with a North American release courtesy of Funimation reaching theaters in January of 2019.

The Tournament of Power has passed, and Goku and Vegeta have returned to their ordinary lives. Unfortunately, their erstwhile ally Frieza has returned to his own life as well, and his soldiers have stolen Earth's Dragon Balls. This won't just be another Dragon Ball hunt, though: Frieza himself is coming to Earth to collect his prize, and he's bringing with him a secret weapon... in the form of a Saiyan. A Saiyan who was long stranded on a distant planet. A Saiyan who hides an apocalyptic and nightmarish power.

The movie marks the first time since 1992 where Tadayoshi Yamamuro is not involved in any way regarding the film's animation direction, with Naohiro Shintani taking over, introducing a smoother, less detailed art style, similar to the early arcs of Z. Much like Battle of Gods and Resurrection ‘F’, series author Akira Toriyama is heavily involved in the film.

It is the fourth highest-grossing anime film ever in North America.

The next anime movie, Dragon Ball Super: Super Hero, was released in 2022.

This movie marks Aya Hisakawa's debut as the new voice of Bulma after the death of Hiromi Tsuru, Vic Mignogna's last performance as Broly after he was fired from Funimation, following multiple allegations of sexual harassment that surfaced shortly after the movie's release, and Chris Ayres’s last performance as Frieza before his death in 2021.

open/close all folders
Tropes #-D
Tropes E-M
Tropes N-Z
Vegeta: Because YOU!! You decided to bring back that devil, you dumbass!! Of all the people you could have returned back to life!!
Cheelai: Hey, wait... what's your name?
Goku: It's Goku. But Broly... call me Kakarot.