Anime / Dragon Ball: Yo! Son Goku and His Friends Return!! 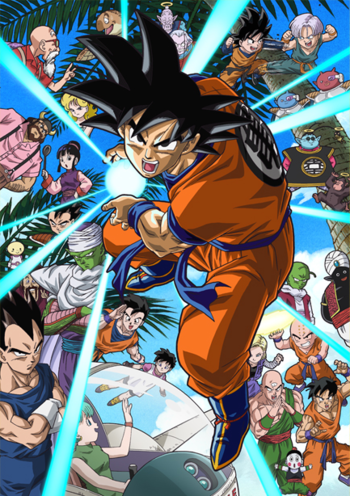 Dragon Ball: Yo! Son Goku and His Friends Return!! is the second Dragon Ball Z OVA and features the first Dragon Ball animation in nearly a decade, following a short story arc in the remade Dr. Slump anime series featuring Kid Goku and the Red Ribbon Army in 1999. The film premiered in Japan on September 21, 2008, at the Jump Super Anime Tour in honor of Weekly Shōnen Jump's fortieth anniversary.
Advertisement:

The plot centers around Mr. Satan's party in honor of all those who helped defeat Majin Buu and the emergence of some mysterious figures from Vegeta's past.

Alternative Title(s): Yo Son Goku And His Friends Return