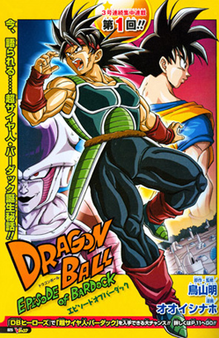 Dragon Ball: Episode of Bardock is a short story written and illustrated by Naho Oishi, later adapted into an OVA by Toei Animation based on the Dragon Ball franchise. It is a sequel to Dragon Ball Z: Bardock – The Father of Goku, based on the What If? scenarios of Dragon Ball Heroes.

It's revealed that Bardock survived being killed by Frieza and was somehow whisked away to the distant past. There, he finds himself in primitive Planet Plant (future Planet Vegeta), where the locals are being attacked by the forces of Frieza's ancestor, Lord Chilled. Bardock befriends one of the locals, and will defend them out of revenge against Frieza.

The story is mostly known for Bardock obtaining the Super Saiyan transformation.

The special is not considered canonical in any way to the series, being merely a What If? story. Despite this, Bardock's appearance in Dragon Ball Fighter Z takes a lot of cues from this special, and Dragon Ball Xenoverse take a few ideas from this side story.

The special was released internationally with the Xbox 360 game Dragon Ball Z: For Kinect.