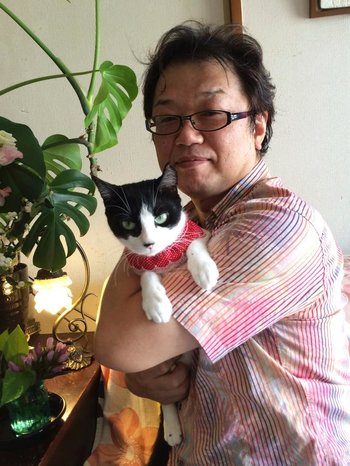 Yamamuro and his pet cat. Notice the lack of highlights.
Advertisement:

Tadayoshi Yamamuro (born 1960, Tokyo) is an animator and character designer. Alongside Akira Toriyama and Masako Nozawa, he is considered one of the faces of Dragon Ball, as his style was used for Dragon Ball Z starting from the Androids saga and the Broly – The Legendary Super Saiyan film.

In his youth, Yamamuro studied martial arts in a Shaolin temple, and then became an animator in Shindo Productions in 1984 in the first animated adaptation of Dr. Slump. He worked with Dragon Ball since its early animated days as a Key Animator, and it wasn't until episode 122 where he was promoted to Animation Supervisor, which allowed fans to see a glance of Yamamuro's style unfiltered, which were close to Character Designer Minoru Maeda's own episodes. As he kept working, his style evolved far away from Maeda's designs, with a cleaner look for its time compared with other supervisors, this brought the attention of Toei Animation's higher ups which allowed him to work as the Animation Supervisor of Broly – The Legendary Super Saiyan, but also as a Character Designer, adapting Toriyama's contributions.

After this, Yamamuro would handle every single Dragon Ball Z film from this point onward, and many of his movie designs were used for the Majin Buu saga of the Z anime. He also became the promo-artist for this era, being atop of his game with Awesome Art, and being responsible for many highly regarded episodes. After Z, Yamamuro would leave Shindo Productions to become an in-house animator at Toei Animation.

When the series ended after Dragon Ball GT, Yamamuro became a Character Designer and Animation Supervisor for other projects, but he was still the de-facto promo artist for Dragon Ball, working in the many videogames or supervising their openings. Dragon Ball Z: Resurrection ‘F’ was the first time he ever storyboarded an entire film.

Tadayoshi Yamamuro was beloved in his heyday, but by the new millenium forward, has been a mixed bag with many, fans and animators alike. Many critized how his character designs look more like action figures with unnecessary highlights, making them hard to animate.

Despite being with the series for decades, he was replaced for the Dragon Ball Super: Broly movie by Naohiro Shintani.

Yamamuro is credited in the following works:

As a Character Designer

As a Storyboard Artist