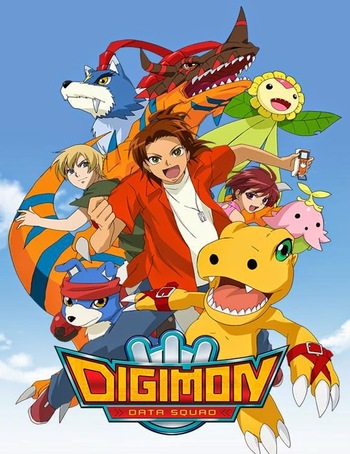 That's how a man lives!
Advertisement:

The fifth TV anime series of Digimon, coming four years after its predecessor Digimon Frontier, and aimed at a slightly older demographic: those who watched its predecessors as kids. The cast is considerably older than usual, the story is Darker and Edgier (If not to the extent of Digimon Tamers or Digimon X-Evolution), and the animation style is the most mature-looking and least stylized of the franchise — the characters are no longer Noodle People!

Digimon Savers consists of equal parts shaking up the formula and adhering to it more than Frontier. Adults have Digimon partners, Digivices are manufactured by humans, Masaru doesn't wear goggles and the effective Big Bad is a human acting of their own accord. On the other hand, it's a return to the standard Bond Creatures setup broken by Frontier, Agumon returns as the lead partner (albeit as a subspecies of the normal Agumon), and DATS must still Save Both Worlds before it's too late.

It was dubbed in the US as Digimon Data Squad, breaking from the former practice of lumping everything together as Digimon: Digital Monsters. It was followed up with Digimon Fusion.