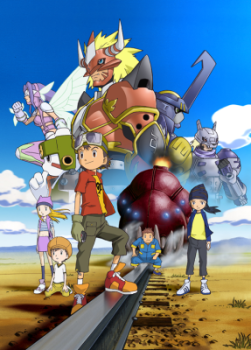 If we're all for one world, there's a world for us all.
Advertisement:

Takuya Kanbara is an average city kid who receives a text message from an unknown source instructing him to "board a train towards his destiny". Taking up the Call to Adventure, he finds the train in question and is whisked off to the Digital World, which is currently under threat from the malevolent Cherubimon. Cherubimon and his minions are consuming the very building blocks of the Digital World (its "Fractal Code") to increase their own power, and if nothing is done then the entire Digital World will be devoured.

All is not lost, however. Takuya and the other "chosen" children who boarded the train inherit the power of the Ten Legendary Warriors that saved the Digital World in the distant past, allowing them to transform themselves into Digimon. With their new powers, they fight to take back the stolen Fractal Code and restore the fractured Digital World to its former glory.

The fourth anime series in the Digimon franchise, following Digimon Tamers, and is, in some ways, the antithesis of its predecessor. While it does have its share of dramatic, intense, and introspective moments, it is relatively light-hearted and dynamic, more focused on battle than in any psychological theme.

It is followed by Digimon Data Squad.