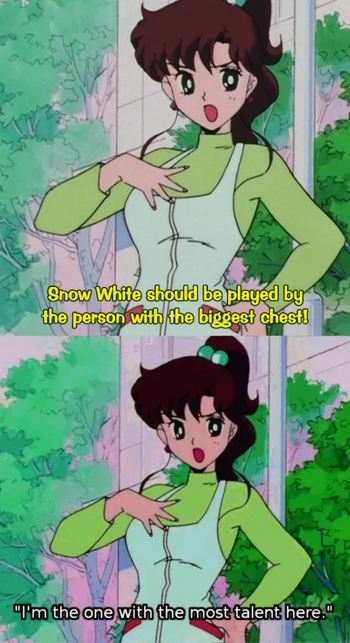 Despite the dub, the episode keeps visually referencing Lita's... talent.
"Contrary to the common opinion, the average American adaptation of a French play fails not because it deodorizes the original (and so perverts the original and makes it a thing ridiculous), but because it actually transforms the French play into a more immoral document than it was in its original form. True, this process is not intentional, but the result is the same."
— George Jean Nathan
Advertisement:

Whether we like it or not, all viewers should be familiar with bowdlerization, especially when it comes to translating and localizing foreign shows (mostly Anime from Japan). Thanks to America's attitude over cartoons being only for kids and adult kids in the cases of South Park, Adult Swim, and FOX's animation line-up (both the Saturday night line-up and the Sunday night one), anything in anime deemed too mature for the new, younger target Demographics has to be cut and covered up, especially any sexual Subtext, Double Entendres, and anything concerning violence, grievous bodily harm, or death.

So why is it that so many adaptations seem to contain more blatant Subtext than the original?

Well, there are several reasons:

Do not confuse this with Dubtitle. See Spice Up the Subtitles for when lines that are innocuous in the original are made inappropriate.