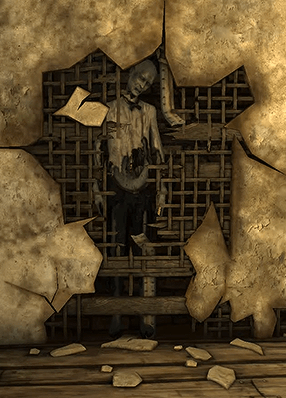 "You are among the weak who will become the foundation of our country. Literally."
— Major General Olivier Mira Armstrong, Fullmetal Alchemist, to Lt. General Raven after cutting him down and knocking him into a newly-poured concrete floor.
Advertisement:

When Disposing of a Body, you need a place where the body is unlikely to come to light again. One method is to find a site where a building or road is being constructed and bury the body in the foundations. Some murderers find a hiding place for their body where it will soon be covered up as construction progresses; others prefer to get hands-on and pour cement over the body personally.

This is particularly likely to be the case if the murderer in question either works in construction or owns the company, giving them special access to dispose of the body. It is likewise (at least in fiction) historically quite popular with The Mafia.

If finding a suitable spot and dealing with all that cement is too much hassle, then a simpler alternative is for the murderer to just hide the body under the floorboards, quite often either the ones at the site of the murder or their own. However, this particular method usually carries the danger that, as the body rots, the horrible smell will draw unwanted attention. As such, this is more often used as a temporary hiding place as opposed to outright disposal.

An alternative version that doesn't always involve murder is when the body in question was originally a worker on the project who died during construction and ended up being buried within it. Examples of this type usually fall into two categories: either it was a genuine accident (and at worst a case of negligence); or the corpse was deliberately hidden by their employers, either because they were just that apathetic to the death, or in an attempt to deliberately cover up the accident.

One danger of this method, if you get away with it, is that you may live long enough for renovations or rebuilding works to uncover the body.

For other cement-related methods of body disposal, see Cement Shoes, in which cement is used to weigh down a body that's dropped into a lake or sea.

Compare with Buried Alive, when sealing up the body is used as the method of murder rather than disposal (although there can be overlap amongst the two).